On a two-week Baltic cruise with the new British Line Ambassador, I took on more things than I had taken in the 30 years before D-Day: I took courses in line dancing and Welsh; I took a hit to my ego when I joined the ship’s chorus and its leader told me I was off the scale by a certain margin. I took it upon myself to examine every ounce of the ship’s 70,000 tons; I participated in three karaoke contests and each time I sent a large part of the public to sleep with my version of nessun dormitory.

I also took self-improvement walks on the upper deck of the ship, where I got a good look at the sea, the stars and the wooded islands of the Swedish archipelago. I took a strong liking to the game of shuffleboard and a strong liking to the back of deck 10, from where you could prospect for porpoises and whales; and a chance at the Abba Museum in Stockholm.

I took it on the chin that we wouldn’t be going to St. Petersburg and a leaf from the book by 90-year-old Leslie, who told me the secret to a successful cruise was a nap after breakfast. What I definitely don’t need to have taken, however, is the onboard Scrabble trip.

It would be wrong to suggest that my inaugural cruise went off without a hitch. The first hours were a bit hectic. Anyway, I was nervous as hell. Although having already traveled with my elders (and written a book about it entitled The Grand Tour), and although he survived a series of blockages, almost attached to an 85-year-old stranger (see jam logs), I arrived at Tilbury Town station – 20 miles east of central London – with needless apprehension.

I was nervous because cruise ships aren’t the conventional home of unmarried guys in their thirties. Walking about a mile from the station to the cruise terminal, where the refitted flagship Ambassador purred impressively, my nerves were still reeling after learning that Margaret Thatcher was the ship’s godmother – a consolation regarding this bad Thatcherite omen, however, was the prospect of buying my cabin at the end of the cruise.

After climbing aboard and spending ten minutes unpacking, I headed to the ship’s main dining room (the Buckingham) for a five-course dinner in an outfit diametrically opposed to a tuxedo (hint: he was shorts and a t-shirt). I took my place at a table occupied by seven single comrades. Although it was a motley crew, it’s fair to say that I was the youngest by far. 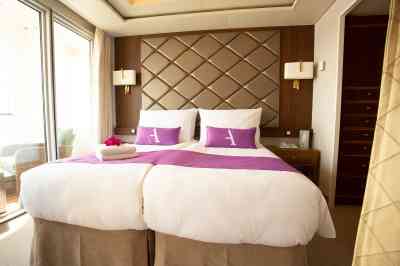 A room on board the ship

That first evening I was painfully embarrassed and dumb, but out of about 67 dishes (Baked Alaska and Spotted Cock, not the least of them) the eight of us on table 74 became, if not friends, then something close. . There was Derek from Somerset, 86 but looking like George Best at 40; Sarah from Nottingham, an unruly ex-teacher who did not reveal her age, but mentioned that she had once voted for Churchill (presumably in an election, rather than a talent contest); and Alasdair, a former Highland bank manager whose stated mission in life is to get his money’s worth.

After dinner, a group of us would often head to one of the many lounges on board, for a flute of something uplifting accompanied by a violinist, before heading to the main theater at Ambience for a short my lovely lady.

Other musicals were available, of course, and one of them was The Lion King. When the Brazilian conductor of the ship’s choir, playing Simba, crawled to the edge of a promontory and sang the lines: “There is more to see than can ever be seen; More to do than you can ever do”, it was the first time in my life that I could identify strongly with a lion – because you love them or you hate them, a cruise has a lot strings to his bow.

For starters, there’s the simple magic of living on something that has a rudder. Then there’s the blessed disengagement from the “real world” that a cruise facilitates, especially if you decline the ship’s internet package; the range of optional entertainment, such as ice sculpting, oil painting and lectures on marine biology; the endless opportunity to chat with people from all walks of life; the various pleasures that a cruise will regularly generate, such as the view, when drawing the curtains in the morning, of a delightful Swedish summer residence or a rotten Danish castle that once belonged to Hamlet.

And on top of all those chains, there are the ports of call. Once in port, passengers could either join one of the organized excursions (at an additional cost) or head into town and explore on their own. I tended to do the latter, because for me one of the virtues of travel is long stretches of mindless wandering.

In Helsinki, I dipped a toe into Finnish sauna culture as I spent a happy hour that oscillated between sweaty captivity and freezing Baltic immersion. In Copenhagen, I paddled doggy-style at a public bathing spot before learning about the notoriously spendthrift and warmongering life of Christian IV of Denmark. In Tallinn, I opted for bear meatballs in the quaint main square. And in Visby, I chose to learn about the Swedish practice of fika, which is basically stopping what you’re doing several times a day to drink coffee and eat something sweet. 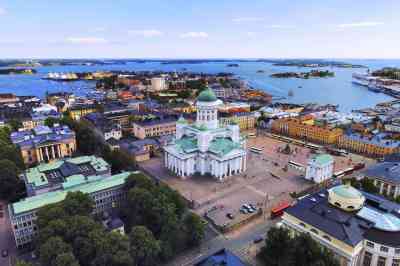 Can cruising be fun for a younger person traveling alone? As sure as eggs are eggs, it can be. Indeed, I think you would have to be particularly difficult to please not to take advantage of it. Because even if you had no interest in ports or people or vistas or hobbies like painting or pétanque, you could just sit in the engine room and read the royal biographies back to back, emerging exclusively at dinnertime for your filet mignon, when you’ll have to break your pleasant silence to let the waiter know what sauce you’d like.

Were there times during the holidays when I felt anything less than the shape of a boat? When I felt a bit at sea? Absolutely there were. But that’s just being human. As things stand, even when traveling alone, you still have to go with yourself.

Am I a cruise convert? I will definitely be keeping my eyes open for bargains, that’s for sure. I wouldn’t mind taking a look at the Norwegian fjords, for starters, and Ambassador’s seven-day cruise around the British Isles sounds like my cup of tea. The line even offers a world tour in 2024, and if by then I inherit a small fortune from an unforeseen aunt, I’ll be on board in the blink of an eye.

Ben Aitken was a guest of Ambassador Cruise Line. Sixteen nights full board on the Hidden Nordic Treasures route, departing 16 May from London Tilbury, from £989 pp (ambassadorcruiseline.com)

Mediterranean with Norwegian Cruise Line
NCL is the only cruise line to offer an onboard resort dedicated to solo travelers. Seven of the line’s ships have studio cabins – compact but contemporary, with affordable prices – which share a lounge where a member of the ship’s entertainment team hosts a singles get-together every evening. The 4,100-passenger Norwegian Epic departs from Barcelona all summer and calls at ports including Livorno, Rome, Naples, Cagliari, Mallorca and Ibiza.
Details Nine nights’ all-inclusive on Norwegian Epic costs from £1,249 pp for single occupancy of a studio, including specialty meals, wi-fi and shore excursion credit, departing 30 July (ncl.com). Fly to Barcelona

Norwegian fjords with Saga
Saga’s two ocean-going vessels are reminiscent of elegant hotels – contemporary and elegant, yet warm and welcoming. Spirit of Discovery has an impressive 109 solo cabins, all with private balconies. The atmosphere aboard the 50+ line is as inclusive as cruising is. Solo travelers can request a communal table for meals and a buddy for excursions, and there’s an aperitif and lunch for singles on every cruise. A car to port is even provided, so there are no suitcases to lug around. This cruise in the Norwegian fjords passes through Bergen, Geiranger and Stavanger (from Sandnes).
Details Seven nights all-inclusive from £2,912 pp in a single balcony cabin, including specialist meals, wi-fi, gratuities, two shore excursions and a private car to port, departing 30 London Tilbury July (travel.saga.co.uk)

Festive Spain with Fred Olsen
Fred Olsen Cruise’s mid-sized friendly ships attract a large audience of solo travelers, lured by the way they’re welcomed on board with singles gatherings, co-ed dining tables and activities such as deck, arts and crafting or assisting marine mammal surveyors from the conservation charity Orca which conducts deck surveys on many of the line’s cruises. Get into the Christmas spirit in northern Spain on this eight-night cruise to Vigo and La Coruña, where the ship docks close to the city center, as well as Gijon and Getxo, for Bilbao and the Guggenheim.
Details Eight nights full board on Borealis from £1,099 pp for a single cabin, departing 14 December from Liverpool (fredolsencruises.com)