Anti-vaccine activist Robert F. Kennedy Jr. was slammed Monday for ‘deeply offensive’ comments suggesting things are worse for people today than they were for late teenager Anne Frank in a Nazi concentration camp after hiding with her family in a secret annex in a house in Amsterdam for two years.

The Yad Vashem Holocaust Memorial and Museum, the Anti-Defamation League and the US Holocaust Memorial Museum have all spoken out against Kennedy, whose anti-vaccine activism has repeatedly drifted into comparisons with the ‘Holocaust.

“Yad Vashem using the Holocaust to advance agendas unrelated to this unprecedented event in human history”,

“To draw reckless comparisons to the Holocaust, the murder of six million Jews, for a political agenda is outrageous and deeply offensive. Those who carelessly invoke Anne Frank, the star badge and the Nuremberg trials are exploiting the history and consequences of hate,” the US Holocaust Museum said in a statement posted on Twitter on Monday.

A spokesperson said the museum made the statement in response to Kennedy’s speech and other recent incidents of people invoking the Holocaust for political purposes. The museum also pointed out that Anne Frank was one of the 1.5 million children who died during the Holocaust.

“Manipulating the Holocaust in this way not only denigrates the memory of its victims and survivors, but also highlights a blatant disregard for the historical truth of this event, if only for the knowledge that Anne Frank was murdered in the Holocaust just because she was Jewish,” President Dani Dayan said in a statement.

Illustrative: A man protests coronavirus restrictions with a yellow star and a picture of Anne Frank in front of the Holocaust memorial in Berlin. (@ZSKberlin/Twitter via JTA)

Jonathan Greenblatt, CEO of the Anti-Defamation League, wrote on Twitter that Kennedy invoking the memory of Anne Frank and the Nazi mass murder of Jews to draw a comparison to the US government “working to ensure the health of its citizens is deeply inaccurate, deeply offensive and deeply troubling.

At a Sunday rally in Washington organized by his nonprofit anti-vaccine group Children’s Health Defense, Kennedy complained that people’s rights were being violated by public health measures that had been taken to reduce the number of people sick and killed by COVID-19. He said the country’s leading infectious disease doctor, Anthony Fauci, was orchestrating “fascism.”

“Even in Hitler’s Germany, you could cross the Alps to Switzerland. You could hide in an attic like Anne Frank did,” said Kennedy, nephew of President John F. Kennedy and son of his late brother, former U.S. Attorney General, civil rights activist and Democratic presidential candidate Robert F.Kennedy.

Kennedy Jr. went on to say that today “the mechanisms are in place so that none of us can run and none of us can hide”, and complained 5G, the latest generation of wireless communication networks, and vaccine passports.

An AP investigation published last month detailed how Kennedy invoked the specter of the Nazis and the Holocaust in his work to sow doubt about vaccines and agitate against public health efforts to bring the pandemic under control, as demanding masks or vaccination mandates. 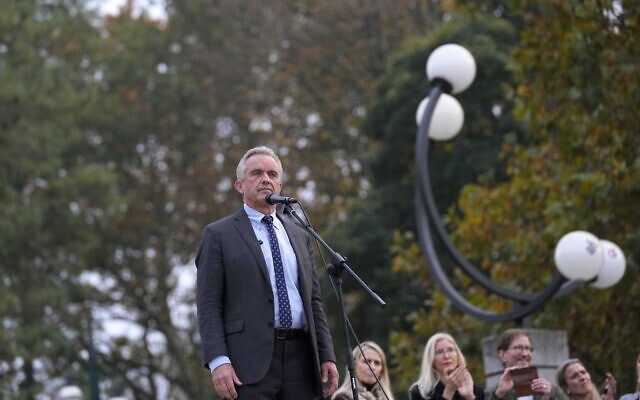 In a speech at the Ron Paul Institute in October, for example, Kennedy made several references to the Nazis, obliquely comparing the public health measures put in place by governments around the world to Nazi propaganda intended to scare people. for them to abandon critical thinking. Last month he posted a video showing a photo of Fauci with a Hitler mustache.

In an email sent by a spokeswoman on Monday, Kennedy described her statement as “a factual observation that technology has given totalitarian elements an arsenal of frightening instruments.”

“I brought up Anne Frank’s terrible two-year ordeal only to show that modern surveillance capability would make her courageous feat virtually impossible today,” he said.

Kennedy said he “didn’t compare anyone to the Nazis or Adolf Hitler,” but did not immediately address other instances where he invoked the Nazis and Hitler to make a political point.

Kennedy apologized in 2015, after he used the word “holocaust” to describe children he said were harmed by vaccines. He said at the time that he “used the term in an impromptu speech”.

The fact that he continued to use such comparisons indicates he “really means it,” said Dr. David Gorski, a cancer surgeon at Wayne State University School of Medicine in Detroit and a critic of the anti-vaccine movement. who followed Kennedy’s rhetoric for more than 15 years. Gorski said Kennedy has been making references to Nazis and the Holocaust in relation to vaccines since at least 2013.

In recent years, Gorski said, Kennedy has been more open about using such language, which he says may indicate that Kennedy feels he resonates with the new fanbase he has. incorporated during the pandemic, or that the consequences of using such language aren’t “unacceptably negative”. 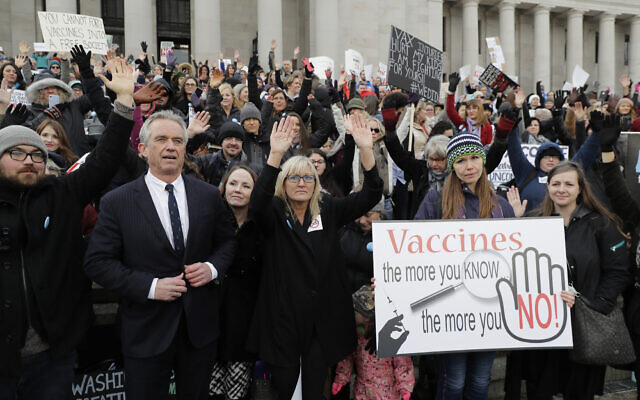 The AP investigation documented how Kennedy grew his group during the pandemic, expanding his audience and attracting millions of dollars in new funding.

Gorski said the language demonstrates one of the ways Kennedy enjoys connecting with his audience: buttering them up by portraying them as going against the grain and smarter than everyone else.

“If the vaccination mandates are totalitarian like the Nazis and the Soviet Union and that kind of stuff, what does that do to the anti-vaxxers? They are brave freedom fighters,” Gorski said. “There is flattery in these analogies.”

Aryeh Tuchman of the ADL’s Center on Extremism said Kennedy’s repeated comments invoking the Holocaust were shocking. Such rhetoric escalates tensions and leads to the demonization of people who disagree, stoking anger and rage, Tuchman said, adding that the repeated comments showed Kennedy had complete disregard for the feelings of the people. Jewish.

“These analogies are historically racist and hurtful to Jews and, frankly, to anyone with a historical memory of who the Nazis were and what they did,” Tuchman said. “Anything in pursuit of his program.”