WHEN a British cotton trader acquired an oil painting of pickers in a field by an American artist, it was exhibited at the Royal Academy of Arts in 1878 as “W Horner”.

The work of Winslow Homer (1836-1910) remains almost as little known on this side of the Atlantic today as it was then.

So much so that the director of the National Gallery, Dr Gabriele Finaldi, underlines it in his introductory comments to a new exhibition in London*, and declares: “Little known in Britain, Winslow Homer’s paintings explore the power, grandeur and beauty of nature as well as the dangers it poses to human life.

Homer features conflict, the struggle for survival, and isolation among his themes, and Dr. Finaldi praises them as being treated “both poetically and with dazzling technical bravery”. Yet no painting of Homer is in a British public collection.

Contemplating a grim 1864 image taken from the front lines of the American Civil War, showing a defiant Confederate soldier displayed on a mound (Defiance, Inviting a Shot before Petersburg), another prominent academic art historian also admits a relative ignorance of the artist, while admiring his technique.

Nearby is a later war scene, Prisoners of the Front, where a Union officer confronts captured Confederates, including a fellow officer.

The mutual and obvious respect shown by the two young men has a magnitude that exceeds the average of war scenes.

And the sophistication and detail are remarkable from a largely self-taught artist who started out as an illustrator for publications such as Harper’s Weekly.

Homer would spend time in Paris, where the prisoners’ painting was shown at the 1867 World’s Fair.

Today’s London show traces Homer’s travels, from the post-war adjustments of the Reconstruction period to his return to America, with paintings in which he explores the lives of African Americans and the tensions of slavery and emancipation, and more. 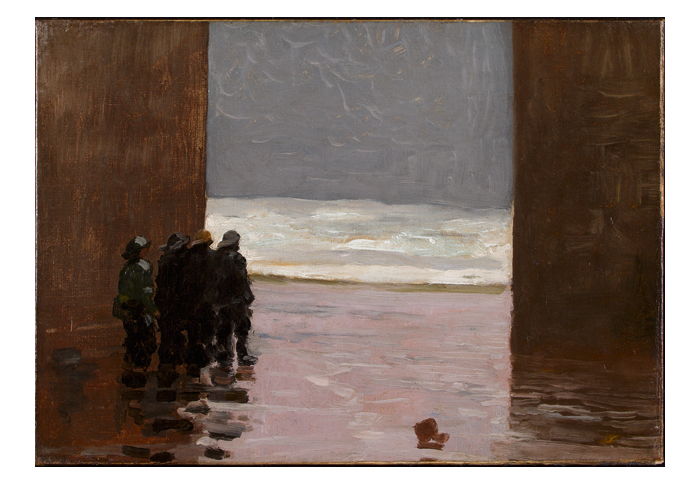 Then, in 1881, Homer was in England to view works by Turner, Constable and others, as well as Greek and Roman treasures in the British Museum. He then spent around 18 months in the fishing village of Cullercoats, just north of Tynemouth, which inspired a number of visceral depictions of the power of the sea and the dangers and hardships of life on the coast. Determination, heroism and resilience are recurring themes, but also vulnerability.

A powerful example of this is The Gale, which features a mother and child on the coast; but there is also the most remarkable of the small oil sketches, never intended for exhibition, entitled The Life Brigade, showing rescuers ready to act. It probably dates from around 1882-83 and was completed after he returned to the United States.

In contrast is Homer’s monumental The Gulf Stream, 1899, reworked in 1906, shown here with studies and sketches, which features a lonely black man adrift on a damaged fishing boat, with cane stalks around him with sharks circling. Homer did not want to explain his works of art; but he wanted to deliver some sort of message. It is understood that a distant ship was added to the board later, offering the possibility of rescue!

In addition to oils, Homer’s mastery of watercolor can be seen from paintings not only from the Cullercoats period but notably from his travels to the Bahamas, Bermuda, Cuba and Florida from 1884 to 1909.

Other highlights of a show, which includes around 50 paintings, are late oils, again often showing a rugged coast – the Maine where he settled – but with fewer figures and more reflection on his own mortality. Another highlight, his latest canvas, Driftwood, once again shows the overwhelming power of the sea and our fragility.

This exhibition is organized with the Metropolitan Museum of Art New York.