In a first for the country, the Karnataka Forest Department has restored the jeep that Indian Forest Service (IFS) officer P Srinivas, who was killed by dacoit Veerappan, was driving in service and built a memorial around it.

Srinivas, a recipient of Keerti Chakra, worked as an assistant conservator of forests at Chamarajanagara and was also the deputy commander of the Special Task Force (STF) formed to catch Veerappan.

The jeep was abandoned at the Karnataka Range Forestry Office in Palar, along the Tamil Nadu border.

“We spent around Rs 1.1 lakh to repair and restore the vehicle. We have now installed him at the museum in a forest guesthouse that bears his name. The museum contains photographs, clothing and other memorabilia of Srinivas. We thought that was the best way to honor him,” said V Yedukondalu, Assistant Forest Conservator, MM Hills Wildlife Sanctuary.

The memorial in honor of Srinivas. (News18)

A shed is built for the jeep which is now in the premises of the Kollegal Forest Department office.

Born on September 12, 1954 in Rajamundry of East Godavari district in Andhra Pradesh, Srinivas joined IFS in 1979. He was appointed Chamarajanagara Forestry Officer in 1990-91, while no Forestry Officer or Police Officer was willing to serve in the district, fearing Veerappan.

Gandhian at heart, he decided to put the villagers at ease. He met all the families in Gopinatham village where Veerappan was born and offered his help and support. He included locals in the search team. He was also the first man to arrest Veerappan, who later escaped. Later, Veerappan invited Srinivas alone, saying he would surrender. 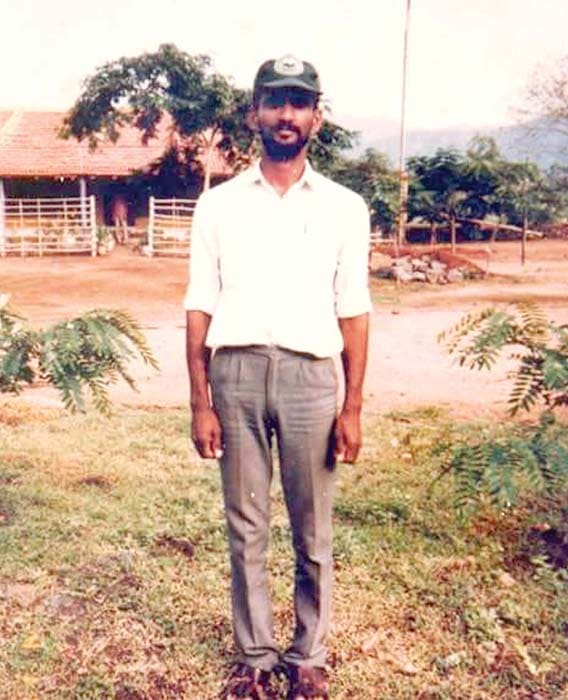 A photo of P Srinivas taken six days before his death. (News18)

On November 10, 1991, when Srinivas went to meet Veerappan, the dacoit tortured and beheaded the officer in a hamlet a few miles from Gopinatham.

Srinivas was much loved by the villagers of Gopinatham. He built several houses for the poor villagers. His picture can be seen in almost every house in the tribal village even now. He built a temple of Mariyamma, the village deity. Till this day villagers offer prayers to his picture with Mariyamma in the temple.

The tribals built a temple on the spot where he was killed by Veerappan.