From Maine to Connecticut, the often treacherously rocky New England coastline is intertwined with a network of historic lighthouses. Many of these literal beacons are still in use, and some are available for interior tours – or even overnight stays. Here are 10 you should check out.

Chatham Light was made famous by the 2016 film ‘The Finest Hours’, which depicted the heroic real-life rescue of the crew of the SS Pendleton, after the ship broke apart during a massive Northeast in 1952. Chatham Light was known as Twin Lights because the original station, built in 1808, featured two wooden towers. These were both replaced in 1841 with metal and brick towers. The lighthouse still operates 24 hours a day, seven days a week and is not open for regular visits. 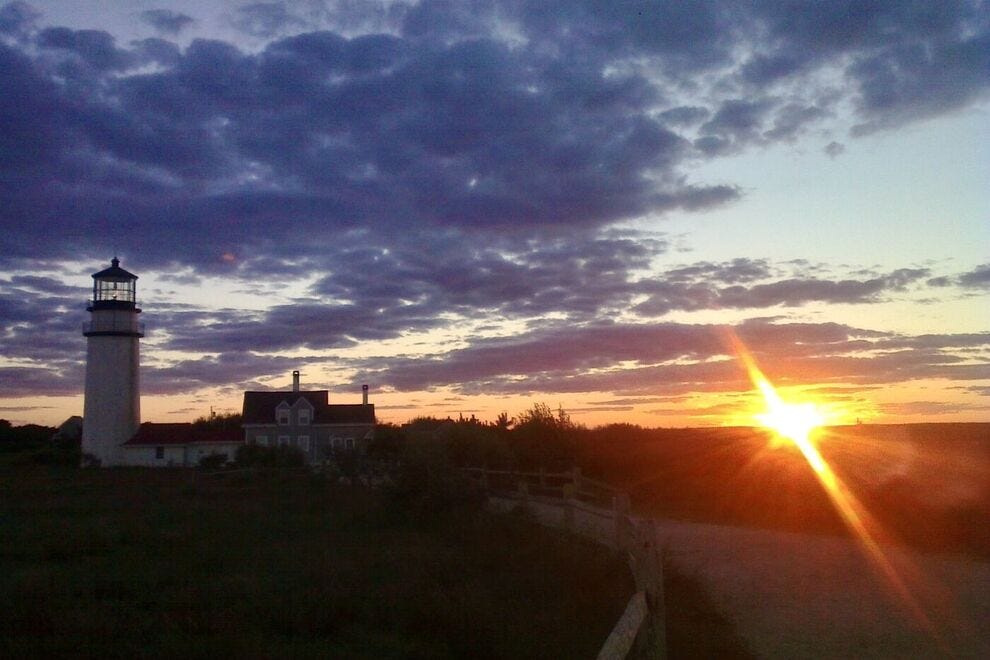 Highland Light is the oldest and tallest lighthouse on Cape Cod and is still active, sending its flashing light from the Cape Cod National Seashore across the ocean. The present tower, however, is not the original one. Erected in 1857, it replaced two earlier towers built in 1797 and 1831. The grounds are open for strolling and there are benches for gazing out over the ocean – the perfect place to watch a glorious sunset. 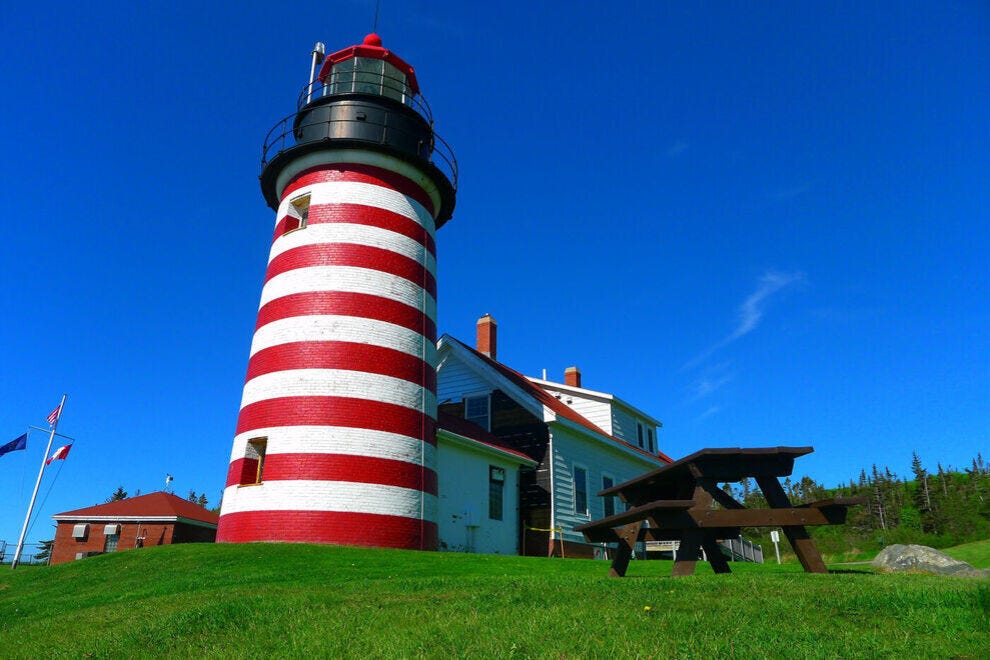 The tower is closed to the public, but the lighthouse grounds and visitor center and museum, located inside the 1858 lighthouse keepers’ house adjacent to the lighthouse, are open and occasional tours inside the tower are offered during the summer months. 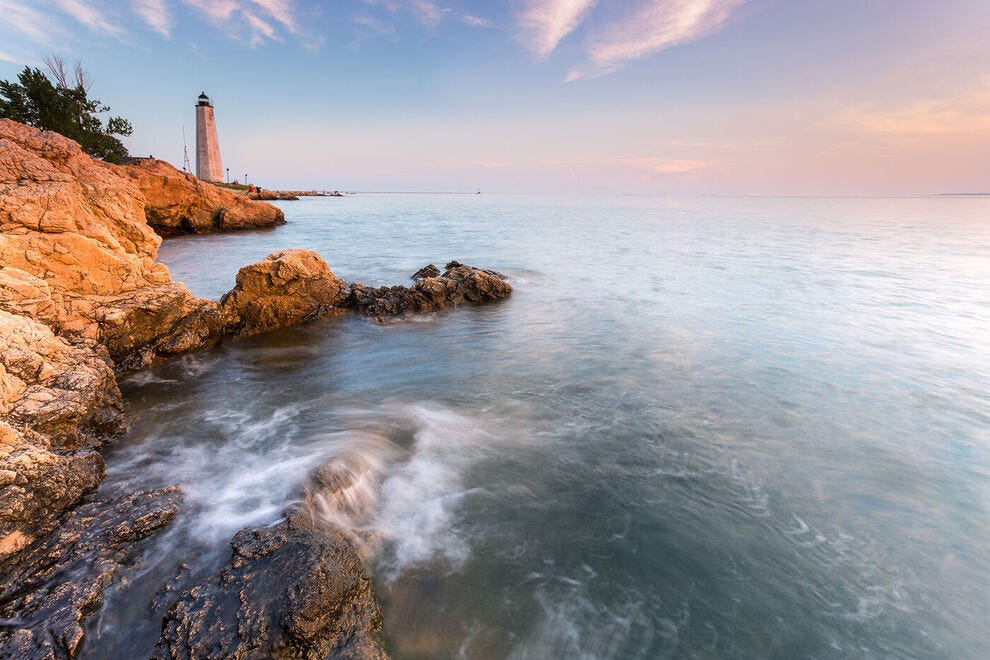 Located in Lighthouse Point Park, five miles from historic New Haven Green, this 1847 lighthouse overlooks Long Island Sound at the entrance to New Haven Harbor. The beach park, which also houses an antique carousel, is open from April to November. While the grounds are open to the public, the lighthouse itself is only open for private tours. 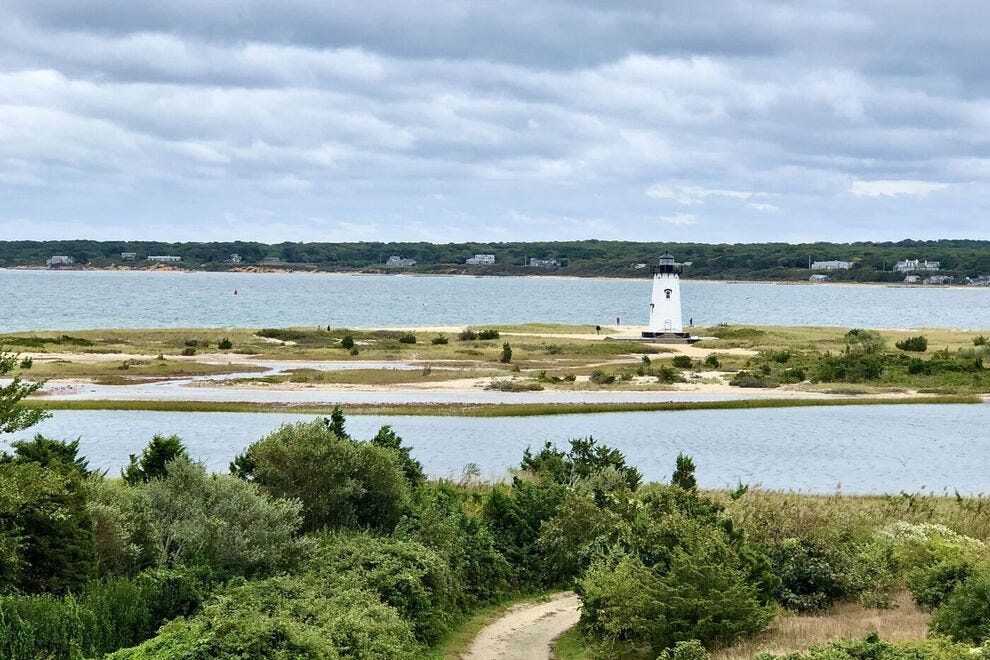 Located in the middle of the dunes opposite the Harbor View Hotel, this small lighthouse was built in 1939 to replace the original from 1828. Overlooking Katama Bay, Lighthouse Beach unfolds around its sides. It is open for visits all summer. Across the water, the Cape Poge Lighthouse, built in 1893, which is not usually open to visitors, stands on remote Chappaquiddick Island in the protected natural landscape of Cape Poge Wildlife Refuge . Chappaquiddick is part of Martha’s Vineyard and is primarily accessible via the historic ferry. 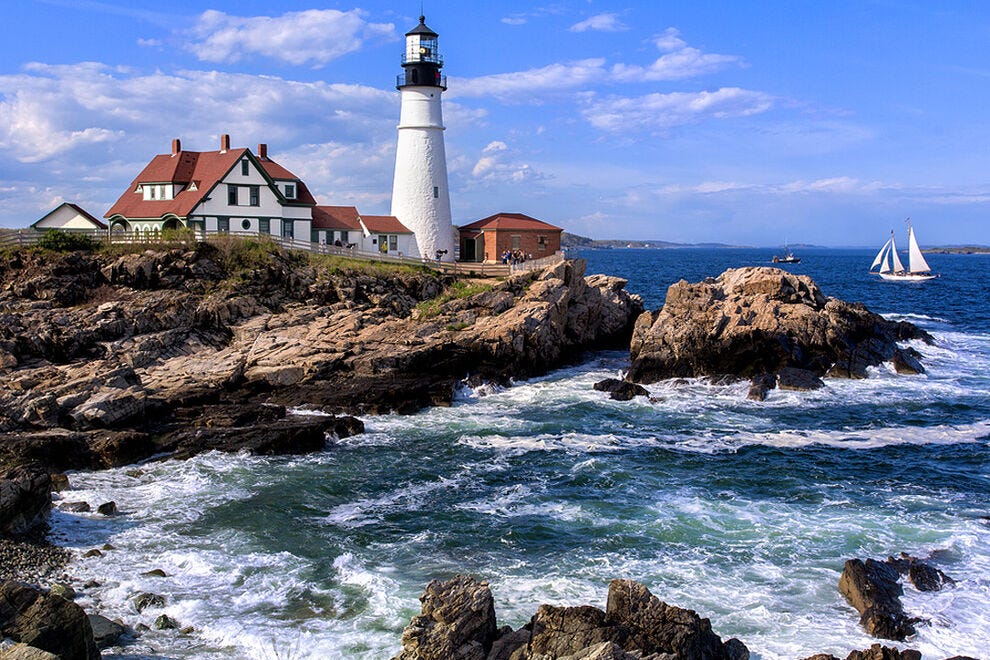 Portland Head Light is located in Fort Williams Park, just south of bustling Portland. Built in 1791, the lighthouse was commissioned by President George Washington and dedicated by Revolutionary War ally Marquis de Lafayette. It is the oldest lighthouse in Maine.

The caretaker’s house, with its distinguished red roof, houses a museum. The park is open year-round, the museum is open from Memorial Day through Indigenous Peoples Day, but the lighthouse is only open in September on Maine Open Lighthouse Day. 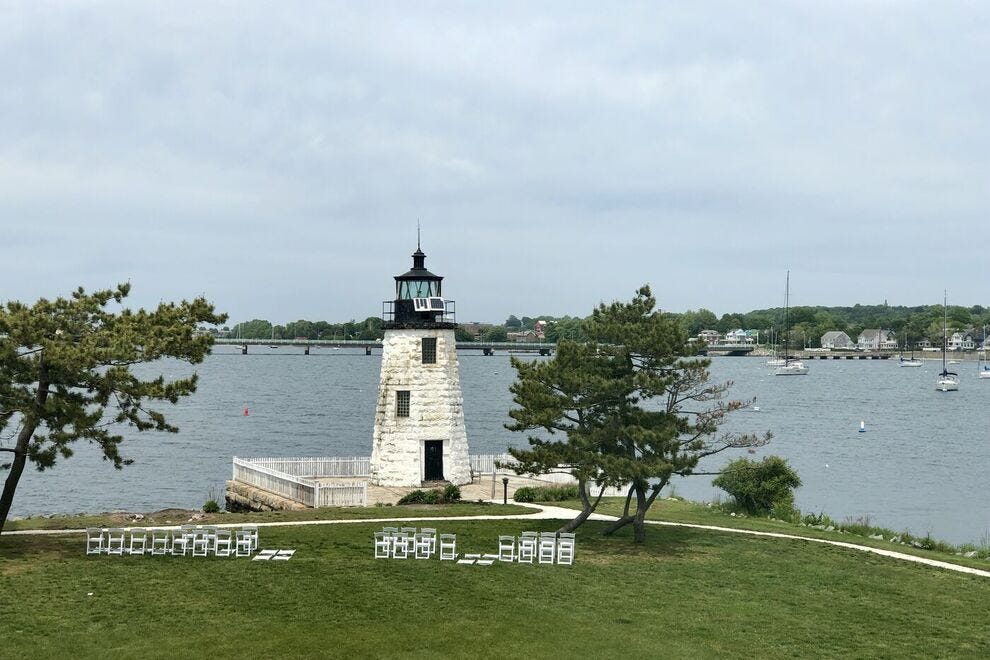 Across the causeway from downtown Newport, Goat Island is occupied by Gurney’s Newport Resort. However, hotel guests, other visitors, and townspeople wander onto the small island and pass Newport Harbor Light, also known as Goat Island Light. The beacon was built in 1842 to replace one that dated from 1824. Entry into the lighthouse is not permitted, but the golden hour cocktails on Gurney’s outdoor terrace make up for that. 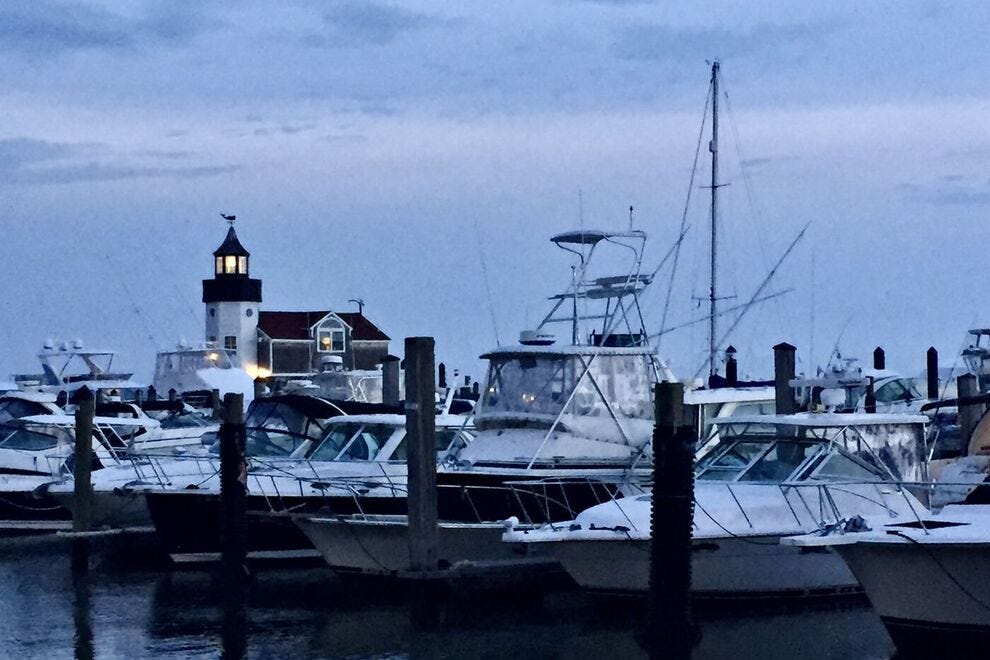 While boaters love the guiding light of this dockside lighthouse, they (and anyone else) can also enjoy a stay in the suite which is nestled inside the working lighthouse. Part of the Saybrook Point Resort & Marina, the lighthouse overlooks Long Island Sound and the Connecticut River estuary. The suite is available from May to October. 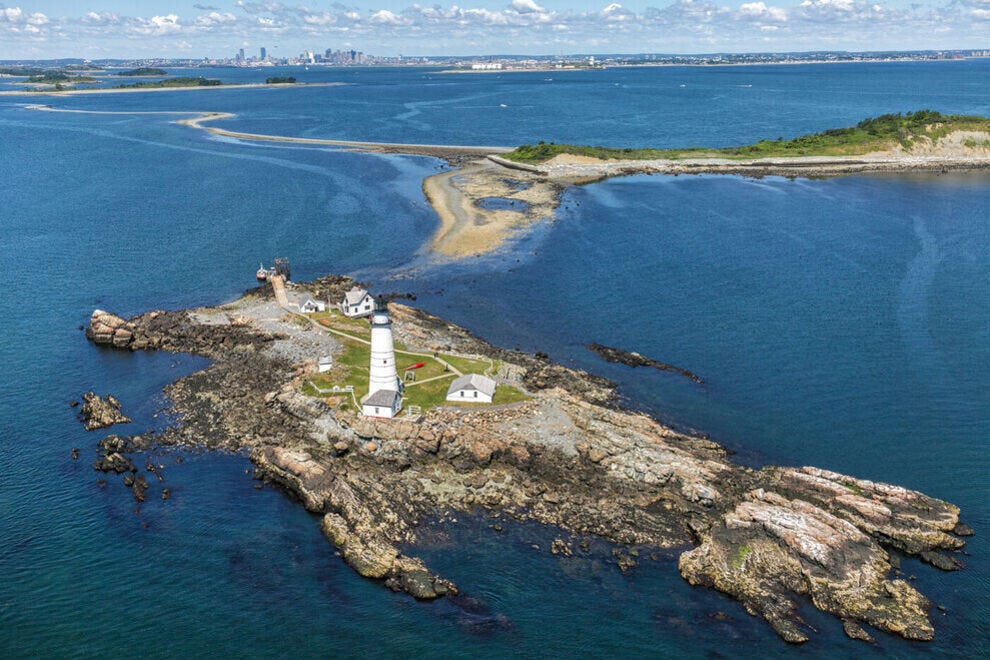 A boat trip through Boston Harbor to Little Brewster Island, the site of America’s first lighthouse, is fun in itself. This still-active and still-staffed lighthouse is not the original tower, which was built in 1716 and destroyed in 1776. Boston Light was rebuilt in 1783. Visitors can climb to the top and tours are accompanied by a history lesson from the lighthouse keeper. 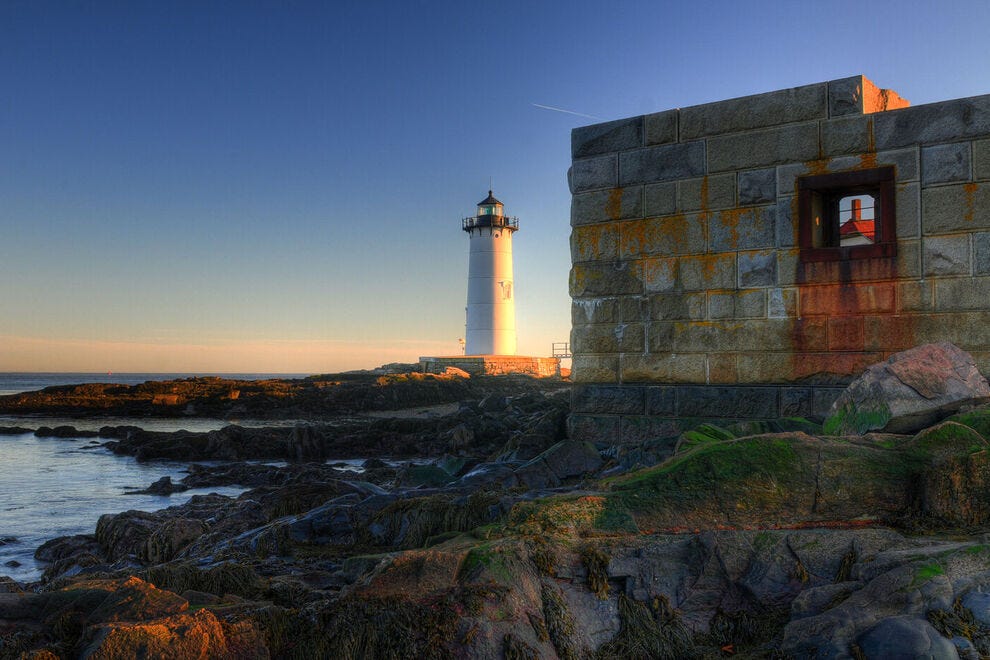 New Hampshire doesn’t have many lighthouses, simply because its coastline is so short. Built in 1771 as a lighthouse to guide ships entering and leaving New Hampshire’s largest coastal harbor, the current Portsmouth Harbor Lighthouse is part of the United States Coast Guard Station Portsmouth Harbour. On the picturesque island of New Castle, it is reached by causeways which connect it to Portsmouth city centre. The lighthouse is only open for pre-booked tours.